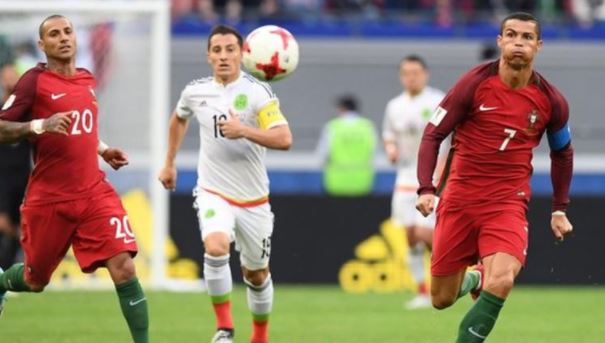 Cristiano Ronaldo opened with a goal for Portugal but were held to a draw by Mexico in their first game at the Confederations Cup.

Pepe had a goal disallowed for offside after a referral to the video assistant referees before Ricardo Quaresma sold the keeper a dummy and slotted in.

Javier Hernandez with the equalizer.

Cedric Soares’ 86th-minute shot was deflected in, but Hector Moreno snatched a point in the 91st minute.

Mexico defender Moreno, who recently joined Italian side Roma from Dutch club PSV Eindhoven, headed in off the post from a Jonathan dos Santos cross.

Earlier, Ronaldo had a header brilliantly tipped away by Mexico keeper Guillermo Ochoa, while Gelson Martins – a target for Liverpool – fired just wide on the counter for Portugal.

On Friday, a source close to Ronaldo revealed the Real Madrid forward wants to leave Spain.

The 32-year-old is “upset” after being accused of tax fraud in the country, adding: “He feels he’s honest, has good character and did everything OK.”

Spanish prosecutors have accused Ronaldo of evading tax of 14.7 million euros (£13m), which he has denied.

Arsenal forward Alexis Sanchez came off the bench to cross for Vidal’s 81st-minute header, with Vargas finishing in injury-time after Sanchez rounded the keeper but failed to beat a defender on the line.

Had Sanchez found the net, he would have become Chile’s all-time leading goalscorer. He currently has 37 goals, level with former Lazio and Juventus striker Marcelo Salas, who retired in 2008.

Just before the break in Moscow, Vargas had a strike correctly ruled out for a very marginal offside following the use of video technology. His goal in the 91st minute was also referred to the video assistant referees – presumably to check on another possible offside – but it stood.

The other two teams in Group B – Australia and world champions Germany – play on Monday (16:00 BST).